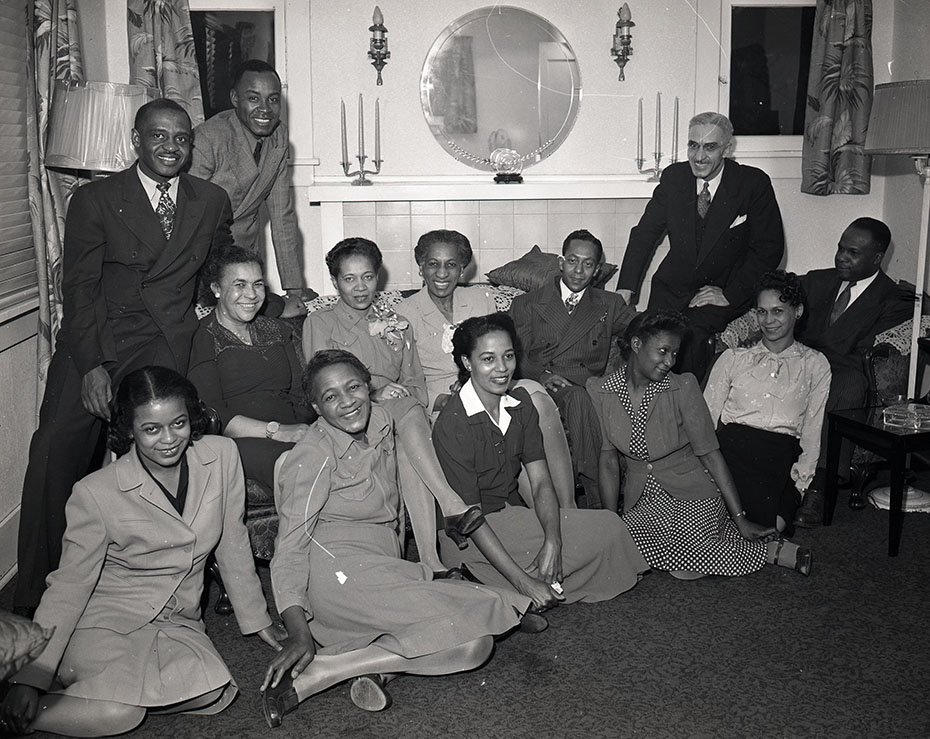 The west side was the beginning place for Salt Lake City’s vibrant African American community.

Besides the known pre-settlement travelers, African Americans entered the Salt Lake Valley in the mid-1800s as both enslaved and free individuals. African Americans settlers were some of the first inhabitants of Mormon settlements dating back to 1847. Later, the arrival of the railroad increased their numbers substantially, especially after the 1880s and into the mid-twentieth century. Many black Utahns were employed in railroad construction and maintenance, and the largest number served as train porters, cooks, and waiters. In 1873 Salt Lake City’s African Americans held a public citizens’ meeting to discuss how to claim and strengthen their rights under the13th amendment (which went into force in early 1865). Beyond the railroad, African Americans worked as servants, dressmakers, barbers, and shoemakers.

Salt Lake City had a small but vibrant African American community (larger than Ogden or elsewhere) for most of its history. By 1910 there were almost twelve hundred African Americans counted in that year’s census. Since almost all public commercial services were eventually denied to non-whites because of Jim Crow segregation policies (which in some cases extended well into the 1960s), several African Americans opened their own small businesses, hotels, restaurants, and clubs that serve Utah’s black citizens. The majority of African American owned businesses were located around and between the city’s railroad depots.

Previous historical narratives mistakenly concluded that nineteenth-century Utah was a more law-abiding, better organized, less violent, and peaceful place in comparison with the rest of the otherwise lawless and vigilante-prone American West.  Recent deep dives into the history of the American West and Utah’s early settlement and territorial periods offer a more nuanced history about the complexity and interconnection of the West with the rest of the United States. What historians have uncovered is white settlers seeking to colonize the Great Basin participated in violent acts against Native American groups. Additionally, Utah settler history includes cases of domestic violence, inter-ethnic violence, and so-called “mountain justice” where families, individuals, and/or communities chose to deal with criminal behaviors outside of the law. In all, the work of historians and archivists reveals a more complex and at times more violent history.

One such part of Utah’s complicated past includes the lynching of Sam Joe Harvey.  Harvey, an ex-solider, arrived in Utah in 1883. He “established himself as a “bootblack” or boot shiner in front of Hennefer & Heinau’s barbershop” located on Main Street in Salt Lake City. On the morning of August 25, 1883, Harvey shot and killed Salt Lake City Marshal Andrew H. Burt. In less than thirty minutes after Burt’s death, officers apprehended him, beat him, released him to an angry mob who then lynched him.

It is important to recognize that accounts regarding Harvey’s actions on that hot August morning (it hadn’t rained since early spring in Salt Lake City) come from an entirely white perspective. Harvey, an African American man, who was also a US Army veteran, was not allowed to explain his side of the story, nor was there an investigation of his motivations. Without Harvey’s perspective, we can only assume to know why he chose to shoot Burt, or for that matter, why he made any of the choices he did. Harvey lynching has been told from the perspective of the people who lynch him, rather than extending to him his right, granted by the US Constitution, to due process under the law.

According to white bystanders, Harvey entered a main street restaurant owned by, F. H. Grice. Accounts claim that Grice called the police station after Harvey threatened him with a pistol. Burt, a well-known and liked marshal with over twenty years of public service and who was also a Bishop of Salt Lake City’s Twenty-first Ward, answered Grice’s call and discovered that Harvey had asked Grice for work. Grice offered Harvey two dollars a day and transportation to and from his farm located twelve miles outside of the city. Grice claimed that after he told Harvey about the location of the farm, Harvey began screaming profanities and yelled at Grice and other customers in the establishment. Grice said after Harvey became upset, he pushed him out the door, which is when Harvey pulled out his gun. Harvey then left the restaurant and Grice then went to the police station.

Burt set off on foot to locate Harvey. He found him on the corner of Main and Second South holding two guns. After leaving the restaurant, Harvey had entered the general store to buy a rifle. Burt then approached Harvey, who asked, “Are you an officer,” and without waiting for a response, shot the marshal. Burt staggered from the scene and subsequently died from his wounds. Harvey willfully, on Salt Lake City’s busiest commercial street, shot and mortally wounded the popular police marshal.

Eyewitnesses quickly apprehended Harvey and held him until the police arrived to take him to the county jail that was located adjacent to the county courthouse at 156 West 200 South. While imprisoned, Burt’s fellow police officers severely beat Harvey.  The officers then surrendered him to an angry mob of Mormons and non-Mormons who had gathered at the courthouse. “Dozens of hands” grabbed Harvey, and minutes later, fashioned a painter’s rope into a noose and hung him from a rafter in a nearby livery stable. The mob then dragged his corpse behind a team of horses down State Street, which is located two blocks south and east of Temple Square until Salt Lake City Mayor William Jennings, stopped the violent procession. Stories about Harvey’s lynching were almost entirely silenced. Notably, Burt was one of the first members of the Salt Lake City police to be killed in the line of duty. His headstone reads, “He met his death at the hands of a desperado.” Meanwhile, Harvey’s body was buried in a shallow grave just outside the Salt Lake City Cemetery, and his skeletal remains found two months later by two men digging for gravel.

Of course, Burt’s murder was not Salt Lake City’s first nor last. However, most defendants received—more or less—their Constitutional right of due process.  The act of vigilante justice and its sparse newspaper coverage speaks volumes about race relations in nineteenth-century Salt Lake City. Captain Burt’s memorization, which included a eulogy delivered to a packed house at the Salt Lake Tabernacle, demonstrates how early Utah residents honored their most respected community members. In contrast, the lynching of Harvey was not atypical to white and African American interactions in post-Civil War America. On a national scale, whites used the act of mob violence and lynching to enforce and uphold racial and class hierarchies.  In short, white Utahn’s honored Captain Burt while simultaneously believing that Harvey, an impoverished African American man, did not deserve a trial.

Without a doubt, this incident had a chilling effect on the approximately 250 African Americans living in Utah territory. Utah was not a slave state before the Civil War (although it did have a law allowing for slavery in the territory) and wished to stay above the fray in the national slavery debates. Nevertheless, with this action, it was made abundantly clear that 1883 Salt Lakers held the same deep-seated racial biases very much that had inflicted the rest of the nation.

As you can see, Utah has a diverse and complex history. African Americans were however contributors to Utah’s economic, political, social, and cultural landscape. In our next post, we will continue to discuss the African American community, in the next century, in and around the Pioneer Park nieghborhood.

Would you like to read the next post? African Americans and Salt Lake’s West Side: Part Two

Interactive Activites: Explore the 1619 Project developed by The New York Times Magazine which “aims to reframe the country’s history by placing the consequences of slavery and the contributions of black Americans at the very center of the United States.” Listen also to the Speak Your Piece podcast of Dr. Paul Reeve (University of Utah professor of history) speaking to host Brad Westwood about Mormonism’s nineteenth-century African American members. Reeve also speaks about his book Religion of a Different Color: Race and the Mormon Struggle for Whiteness (Oxford University Press, 2015) where he considers Mormons and ideas about whiteness within the broader 19th century American society. Speak Your Piece: A Podcast about Utah’s History.

Do you have a question or comment, write us at “ask a historian” – askahistorian@utah.gov

Contributors: Special thanks to Dr. Ronald Coleman (professor emeritus, Ethnic Studies Department, University of Utah) and Will Bagley (Western historian) for contributing to the content of this post.

To see all the sources used in writing Salt Lake West Side Stories go to: https://heritageandarts.utah.gov/selected-readings/