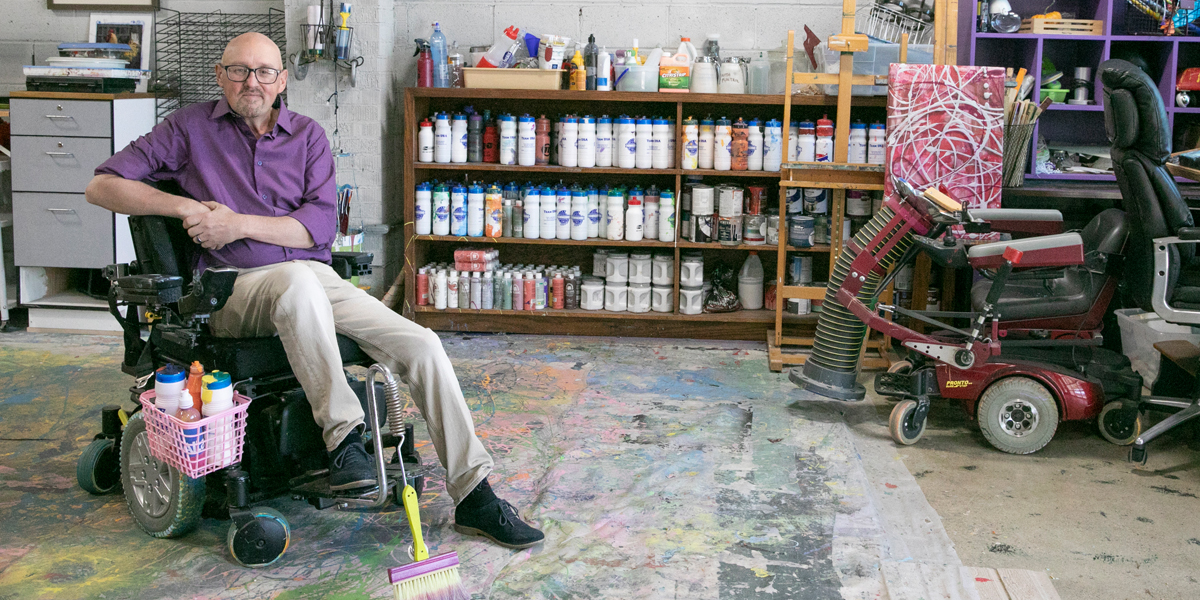 At his Logan studio, Michael Bingham lifts artists of all abilities with grit and a knack for reinvention

During the pandemic, artist Michael Bingham has been dreaming about building a spaceship.

Bingham is a graphic artist-turned-fine-artist-turned-arts-educator, now building a Logan nonprofit. Three years ago, he launched Jump the Moon, a drop-in arts studio aimed at serving artists of “diverse abilities.”

“I used to think I was born to be an artist. I’m not,” Bingham says, with wisdom gained from a recent accident that once again refocused his life.

For the past couple of years, Bingham has been thinking about what he didn’t understand about artists with physical challenges. He wanted to relate better.

On March 7, 2019, he started on that journey of understanding. As the artist was painting a ceiling at home, the ladder slipped out from under him. He fell 20 feet, breaking his neck. He wasn’t breathing when his wife, Suzy, trained as a medical assistant, found him and then revived him.

He suffered a fractured skull, a brain bleed, and 12 fractures, seven in his neck bones. He spent three weeks in intensive care. “Bunch of miracles along the way,” he says. “I really should have died.”

As he speaks about his year of recovery, you can hear the voice of someone who calls himself “too optimistic.” He refers to the accident as a blessing, even after having to relearn how to walk, talk and swallow. His doctor told Bingham he didn’t understand why he wasn’t paralyzed — or dead. “I know what a 10 on the pain scale feels like now,” Bingham says. “Even that I’m grateful for. Gives me empathy.”

And just as he rips apart vacuums and repurposes rebar to use in his art, Bingham recycled the drop cloth that was under his ladder before the accident. He turned it into a painting for his Utah State University MFA exhibition, which he titled “Second Chances.”

Whatever Bingham understands about helping others make art, he says, grew out of his own learning disabilities (later diagnosed as ADHD and dyslexia), which made school difficult when he was growing up in rural Idaho towns.

At Ricks College, now Brigham Young University-Idaho, art professors encouraged him to apply to Pasadena’s prestigious Art Center College of Design. “I had found my element,” he says.

From art school, Bingham was recruited by the Hallmark Cards company in Kansas City. For a dozen years he was part of a thriving art department until the Internet wiped out the growth curve of the greeting-card industry.

Bingham transitioned into making a living as a fine art painter. In 2001, he, Suzy and their seven children moved to Cache County, which they picked to be closer to her parents in Pocatello and his parents in Ogden.

For a decade, he taught at Mountain Crest and Ridgeline high schools, where he focused on helping students see art assignments as creative problem-solving opportunities. He wanted to especially help students with disabilities, but it was difficult to find the space or the time. “You only have an hour with 40 kids,” he says of teaching high school. “If you move fast, you can get around to everybody and spend maybe a minute with them.”

During this spring’s coronavirus shutdown, Bingham launched Jump the Moon’s first extraordinary change: expansion. The 4,300-square-foot art studio, previously an auto glass shop, leased an adjoining 2,200-square-foot space, a former auto garage. Before remodeling it into a performance space, Bingham realized it could solve another of his pressing problems.

Recovery had slowed his ability to create art, and by the time he was ready to plan an exhibit to complete his MFA requirements, gallery spaces were all booked up. Facing a looming deadline during a pandemic, Bingham found himself in problem-solving mode, which is his artistic superpower.  “I get excited, I get happy when a big problem happens — my wife tells me that’s not normal — because it presents an opportunity to use creative problem solving,” he says.

That prompted an idea: The space behind his closed studio had industrial bay doors. So in May he held a drive-in art exhibit, maybe the first in Utah, and certainly the first in Logan. People could drive into the space and safely view his art from their cars. Other viewers, wearing masks, could walk around the garage and view paintings at a safe distance.

Now he’s partnering with another Logan nonprofit, the Unicorn Children’s Theatre, to transform that drive-in gallery into a performance space with a 75-seat house.

That’s where he hopes to land the spaceship, which he’s designing with an artist friend who builds props. Bingham describes a steel structure covered by carved styrofoam, to be reached by a long, twisting ramp. Inside, there will be a captain’s bridge — “with levers, knobs, cranks and twisty things that you push and pull with hands and feet to make different sorts of sounds or noises or music.”

He envisions such a magical space that everyone, including wheelchair users, will be compelled to put forth the energy to reach it. “If I make fun enjoyable, I’ve discovered that people forget the work and effort part because they are playing,” Bingham says.

In the perpetually cash-needy nonprofit world, the idea of building a spaceship might sound like a pipe dream in regular funding cycles. Pandemic or not, Bingham keeps focusing on the need. The spaceship will provide movement, physical therapy, learning and self-expression, all in one place. “I’m really of the mindset ‘If you build it, they’ll come,’” Bingham says, infusing that “Field of Dreams” Hollywood story tagline, circa 1989, with the power of post-COVID optimism.

Who does that? Who designs a spaceship to help people who can’t move easily have fun while they are exercising? asks Rochelle Thompson, of South Jordan, mother of an art-loving special-needs son, who was appointed last year to the studio’s board.

When you walk into Jump the Moon,  there’s art in front of you and above you — in the form of a massive astronaut sculpture Bingham created out of recycled steel rods, with a jetpack made from vacuum parts. In 2014, the sculpture was displayed in front of Abravanel Hall as part of Salt Lake Arts Council’s “Flying Objects” public arts project. (An earlier “Flying Objects” sculpture, of a massive cow flying over the moon, led to the studio’s name.)

On one side of the studio there’s a bank of computers, and on the other side there’s a gallery space where Bingham hopes to sell artists’ works. At the center of everything, there’s Bingham, welcoming visitors, but more importantly, observing.

“He makes a lot of impossible things into reality, and that’s very incredible to watch firsthand,” says Caleb Clark, a USU graduate who volunteered for more than a year at the studio.

Bingham engineers improvisational art tools, often out of thrift-store finds. His adaptations can be as simple as melting crayons into easier-to-grasp shapes, or as strategic as attaching implements to wheelchairs. “I just start making a list, and I count a lot of things as pluses,” he says, explaining how a person’s body weight can help a wheelchair serve as a printing press. “What do they have? What can we use?”

One regular visitor couldn’t express himself with words, but liked to wrap yarn around things. Bingham affixed silicone to superhero figures, which made the yarn adhere better. “I don’t know how Michael figured that out,” Clark says.

Bingham is a master at combining recycled materials and “making them say something they weren’t necessarily meant to say,” says Raymond Veon, assistant dean for arts education at Utah State University, a friend and colleague.

Supporters say Bingham’s ideas are advanced on the artistic empowerment side, but he’s still learning how to sustainably operate a nonprofit. “We can do a lot with a little bit” is how he optimistically describes the funding chase.

In the months before everything shut down, Bingham learned that asking for donations, of money or time, helped visitors value the studio more. “That one pivot alone in our thinking and our approach is making a big difference,” Bingham says. “If you always give, give, give, and people don’t have the opportunity to give back, that can create a resentful situation.”

During an interview about COVID-era pivots, he’s considering the problem of installing electricity near the stage. For another interview, he’s taking a break from jackhammering the sidewalk to make a smoother path for wheelchairs. “I’m kind of in my happy place right now because I have so many huge challenges to overcome,” says Michael Bingham, a sculptor-turned-empowerment-artist. “I’m kind of giddy.”