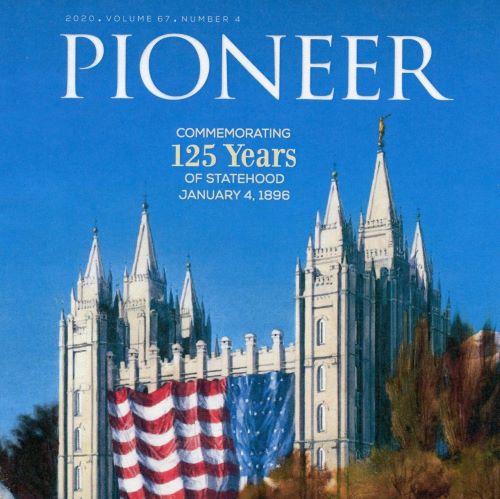 Podcast Introduction: This episode includes William Tanner, the publisher of the Sons of Utah Pioneer’s (SUP) magazine; Wayne Hinton, the organization’s 2020 national president; and Thomas Alexander, the 2015 national president, all engaged in a discussion with Speak Your Piece host Brad Westwood, about this all-male Utah history organization: its origins, it’s membership (today you do not need to be a desendent of a pioneer to join, nor do you need to be member of the Church of Jesus Christ of Latter-day Saints); and its flagship history publication The Pioneer.

Regarding the magazine, this graphically engaging magazine has been in production since 1995, and its January issue delves into Utah’s campaign for statehood (see the cover above and issue’s main contents below). The interview includes a lively discussion on the messy history of statehood. In the end each guest tells something they think most Utahns would not know about Utah’s statehood story.

Dr. William (Bill) W. Tanner, DDS, practiced dentistry in Beverly Hills for 38 years, before returning to his home state to serve for over twenty-five years as the publisher of the Sons of Utah Pioneer’s flagship publication the Pioneer. Tanner also serves as chair of the magazine’s editorial board.

Dr. Wayne Hinton is professor emeritus, in History at Southern Utah University in Cedar City, Utah. He is author among dozens of other articles and works, Utah: Unusual Beginnings to Unique Present. He served as 2020 National President of the Sons of Utah Pioneers. He was the organizations first national president elected by popular vote.

Dr. Thomas Alexander is professor emeritus, in History at Brigham Young University in Provo, Utah, where he was the Lemuel Hardison Redd, Jr. Professor of Western History. Alexander also served as director of the Charles Redd Center for Western Studies, also at BYU. He also served as president of the Sons of Utah Pioneers in 2015, and has since served as editorial staff for the Pioneer Magazine.

Origin Story of the Sons of Utah Pioneers: Proposed first in 1907 as “the Sons and Daughters of Utah Pioneers,” this fledging organization expected both men and women to take part, urging all ancestors of Utah’s pioneers, who arrived during Utah’s earliest Euro-American settlement period (1847 to 1869) to join-in. Despite some very grand intentions, and inaugural conference that included LDS Church President Joseph F. Smith as its keynote speaker, the organization gradually stop functioning.

Why? One reason was six year prior, in 1901, another Mormon pioneer organization, known as the Daughters of Utah Pioneers (DUP) had been founded. This organization quickly became a promoting force in “honoring Utah’s Pioneers (inspired by the 1897 fiftieth anniversary pioneer jubilee celebration).” The Sons idea was eventually revived, this time in Provo in 1923. This gathering of “Provo men” became the BYU-based George Albert Smith Chapter, and serves today as the oldest chapter in the organization. In 1933 after a Provo SUP member, Lawrence T. Epperson settled in Salt Lake City, the organization came to the capitol city, and shortly thereafter expanded into a national and international organization. Here is the website for the SUP.

Since the mid-1930s these two gender based, statewide history organizations (the SUP and DUP), have worked in parallel, and at times together, to honor, document and promote Utah’s Mormon pioneers. To read Dr. Thomas Alexander’s ten page history of the National Society of the Sons of Utah Pioneers click here.

In celebration of Utah’s 125th statehood anniversary the Utah Department of Heritage & Arts produced a half-an-hour program aired on January o4, 2021 Thrive125: A Utah Celebration. This is the last in a four episode series on Utah’s statehood story. To listen to these other shows click here: Leo Lyman, Ken Cannon and Neylan McBaine.