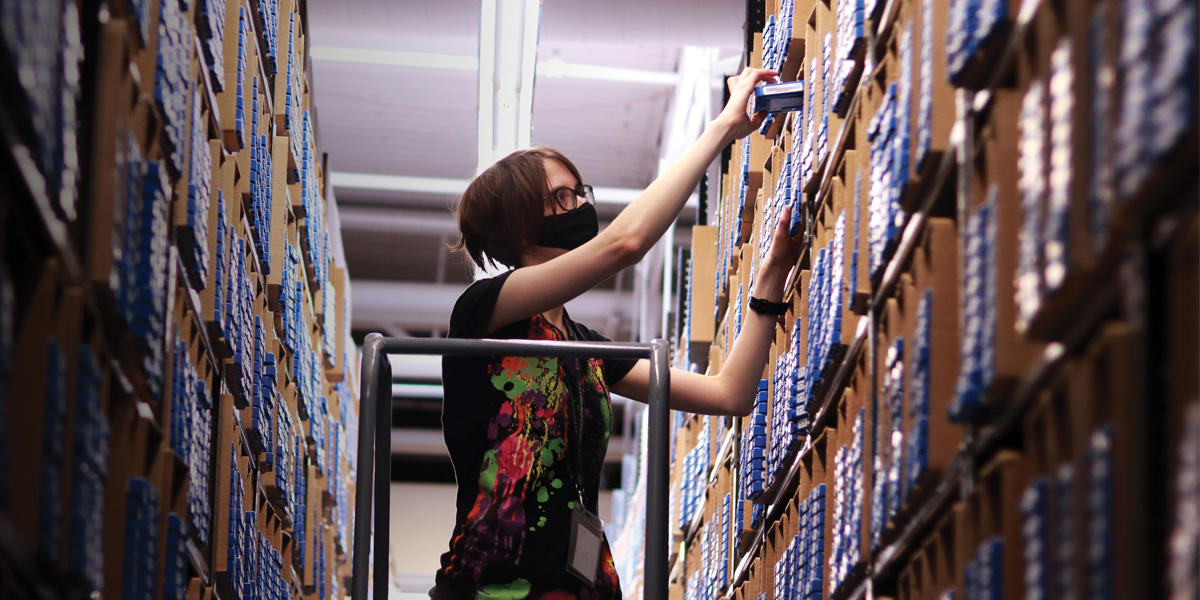 On the phone, Ruth Levi, a 97-year-old reader from Chicago, admitted she was a little bit desperate.

In the middle of the pandemic, the Midwestern warehouse of the National Library Services for the Blind and Print Disabled had shut its doors. Yet Levi, who is visually impaired, was routed to the phone of Lisa Nelson, manager of Utah’s Program for the Blind & Disabled, which remained open.

“She called one day out of the blue,” Nelson recalls. “I’m calling Utah because I’ve just got to have some books. I feel like I’ve been on a desert island for the past little while because I don’t have a thing to read and I don’t want to watch TV.’”

On March 11, as libraries across the country were considering closing due to the spread of the virus, Utah officials classified as “essential” the staff of the Multistate Center West — located at the state library complex on the west side of Salt Lake City. (The warehouse, which operates under a contract from the Library of Congress, was only closed for a one-day building safety check after Magna’s 5.7 magnitude earthquake on March 18.)

Due to the pandemic, volunteers and public visitors haven’t been allowed to enter the Library for the Blind facilities, but staff kept shipping out book requests. In contrast, the country’s Multistate Center East, in Cincinnati, closed on March 23 and remained shuttered until June 1.

Utah library managers upgraded sanitation and safety routines while mandating masks for workers, and began quarantining materials for three days after they were returned. Nelson says her Canadian-reared husband lent her a hockey stick as a visual reminder of what the distance of 6 feet looks like.

Library staff took orders via an online catalog or by telephone, then shipped Braille and digital books all over the country. From March to June, Utah staffers shipped three times as many volumes as usual through the state’s interlibrary program, says Joe Ballard, director of the Multistate Center West. “I do think it came at some sacrifice on my staff’s side,” says Colleen Eggett, Utah State Library director.

Some readers were so grateful they tucked thank-you notes in returned books. In a May letter, Utah Gov. Gary R. Herbert commended state library workers for their service, underscoring how books can provide comfort and escape during times of crisis.

Back in March, readers — who were allowed to check out 30 books at a time — were hoarding books, worried the Utah warehouse would soon shut down. When the limit was increased to 60, readers were willing to return books before they had read them for the second or third time, Nelson says.

“At first, they wanted everything we had on pandemics or plagues or catastrophic events through history,” says Nelson, adding that by June, readers were again requesting more entertaining books by favorite authors.

Listening to digital books has been invaluable during the pandemic, says Sharon Hinson of St. George, in the way the stories allowed her to go into her own “wonderland.” She became friends with state librarians as she regularly placed her book orders by phone. “I appreciate them so much for keeping me going, because I would have gone stir crazy” without new books to listen to, says Hinson, who added that she had lost her sight gradually over the past 24 years.

Even after the Midwestern warehouse reopened in June, Ruth Levi continued to call Utah to request new books and ask questions, most recently inquiring about writer Wallace Stegner’s time living in Utah. Nelson says she was always happy to talk with her new friend, and happy to contact her counterpart in Cincinnati to fulfill Levi’s book orders.