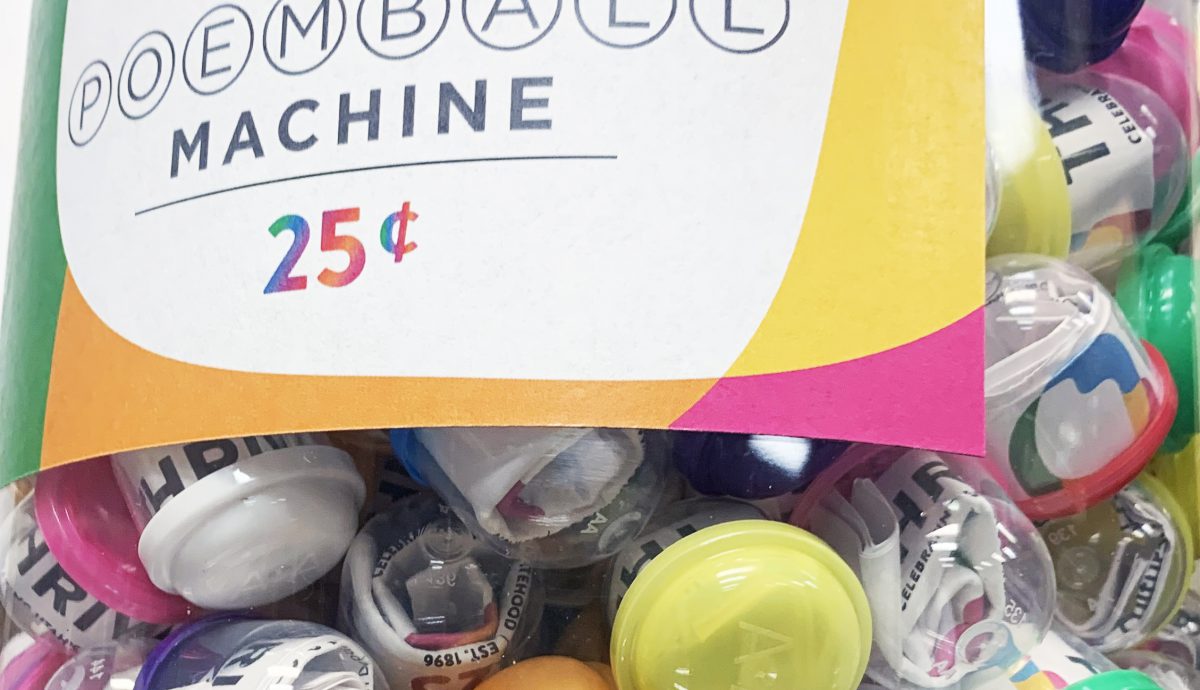 Score a piece of the state’s literary history — for just a quarter — at the Utah Arts Festival. As part of Thrive125, Utah’s statehood celebration, 125 writers considered the idea of our state in writing 125-word essays and poems. That collection, Utah@125, is being published as a digital literary chapbook.

But this weekend, arts lovers can buy original literary art in a new PoemBall machine installed at the Utah Arts Festival. The machine is located north of The Leo, outside the Literary Tent, operating Aug. 27-29 at Library Square in downtown Salt Lake City.

The assignment was simple: Write 125 words of nonfiction, in poem or essay form, about Utah. One word to represent every year of Utah’s history as a state. But that compressed word count, what had to be left out, also made the assignment complicated.

The Utah Department of Cultural and Community Engagement offered that commission to scores of writers: spoken and literary poets, essayists, nonfiction writers, journalists and playwrights.

Some of the writers had earned distinction in the Utah Arts & Museums’ annual Utah Original Writing Competition. Others were published in Torrey House Press’s recent anthology: “Blossom as the Cliffrose: Mormon Legacies and the Beckoning Wild.”

The aim was to amplify contemporary voices in the state’s history, to layer the words together in an ongoing conversation about Who We Are and Why We’re Here. That’s one of the things that literary stories can do best: Remind us that no matter where you came from, or what language you spoke when you arrived, being here is a choice to be lost in the surprises of this place. Utah at 125.

The first chapter was published back in the spring here. (We will expand this digital literary chapbook to showcase the work of all 125 writers later this fall.)

Upon publication, that’s when our literary partners at Utah Humanities got the idea to distribute Utah@125 pieces through PoemBall machines.  That clever idea — of using candy machines to vend literary works — comes from Provo Poetry’s Trish Richardson and Marianne Hales Harding.

The poets launched the local PoemBall movement and have been operating multiple machines in Utah County for years. (See City Weekly story.)

And in a nice local twist, one of the country’s largest candy vending machine manufacturing companies relocated from California to Utah five years ago, according to Kevin Johnson, director of operations at candymachine.com.

The company, with manufacturing plants in Utah and Chicago, stocks 60 different flavors of gumballs, as well as making and selling candy vending machines. Machines stocked with prizes remain popular with businesses, such as pediatric dentists. More recently, homeowners are installing gumball machines in their theater rooms.

But through this weekend, you can invest a quarter to buy an original essay or poem at the Utah Arts Festival.